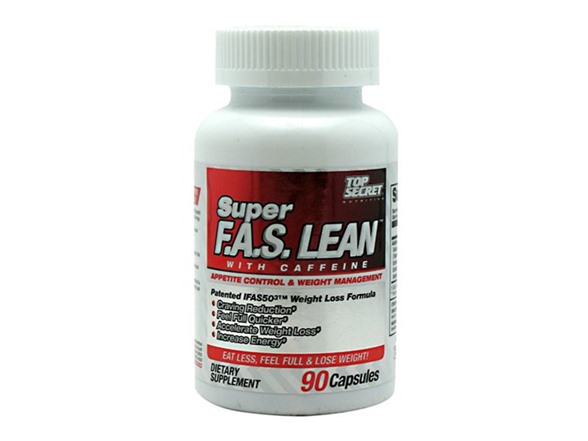 iFAS503
Is a unique, patented combination of three herbal extracts plus caffeine that work synergistically to promote weight loss and suppress hunger:

The findings from previous research were confirmed in another study, which further suggests that the three ingredients in patented ifas503™ inhibit fatty acid synthase.

Glucomannan
Is a soluble fiber derived from the konjac root, and is very beneficial to overall health. Glucomannan has been included in Super F.A.S. LEAN because of its beneficial effect on weight loss. Research suggests that glucomannan helps in the regulation of weight management due to its bulk-forming properties. It is able to absorb many times its weight in water, creating bulk in the stomach and making you feel more full. Research has shown that when eaten prior to a meal, glucomannan causes individuals to eat less.7 Additionally, research suggests that when taken prior to meals, glucomannan may support healthy glucose absorption and fasting levels.

Additional research suggests combining glucomannan and exercise is beneficial for health and weight management. The Department of Kinesiology, Human Performance Laboratory, University of Connecticut, performed a study to examine the effects of adding a total-body exercise program to an eight-week diet supplemented with glucomannan. The effects studied included weight loss, body composition, blood parameters, and physical performance in overweight men and women. The results indicated that exercise appeared to augment the reduction in fat mass and waist circumference, but did not affect total weight loss. Researchers concluded that the addition of a resistance and endurance exercise training program to a glucomannan diet regimen significantly improved measures of body composition.

Camellia Sinensis
Sinensis in the form of green tea extract is standardized for bioflavonoid-like antioxidants known as polyphenols, particularly Epigallocatechin Gallate (EGCG). Aside from the FAS-inhibiting benefits described previously, research suggests that green tea has thermogenic properties and promotes fat oxidation beyond that explained solely by its caffeine content. Green tea extract may play a role in the control of body composition via sympathetic activation of thermogenesis, fat oxidation, or both. Another study performed in Switzerland confirmed the thermogenic and fat oxidation benefits of EGCG.

Directions: As a dietary supplement take 3 tablets 20-30 minutes before each meal, must be taken with at least 10 ounces of water for maximum benefit.

*These statements have not been evaluated by the Food and Drug Administration. This product is not intended to diagnose, treat, cure, or prevent any disease.

Warnings: If you experience chest pain, vomiting, or difficulty in swallowing or breathing after taking this product, seek immediate medical attention.

Warnings: If you experience chest pain, vomiting, or difficulty in swallowing or breathing after taking this product, seek immediate medical attention.