Hey, you can only buy 10 of these.
Leave some for the rest of us!
Update the quantity in your cart.
New
3.9 oz.
Limit 10 per customer 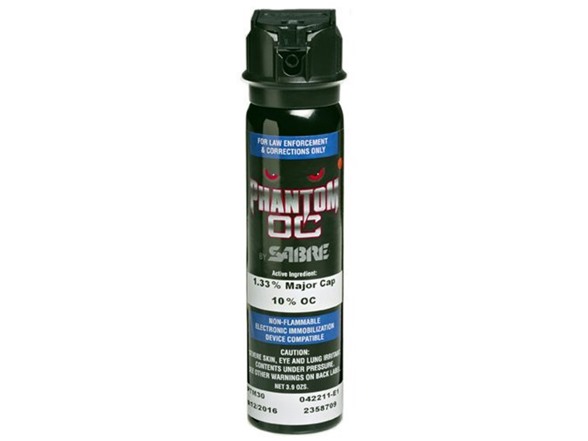 Hits Hard & Decons Easy, New OC Technology Makes Extractions Easier, Safer & Requires Less Clean Up.
Extracting and controlling enraged, combative and aggressive inmates and subjects is a difficult task which emergency response teams encounter on a regular basis. OC (Oleoresin Capsicum) has been proven to be the ideal tool to gain a tactical advantage during these dangerous scenarios.

A few challenges exist when deploying traditional OC into confined areas: Cross Contamination, Decontamination & Clean Up. PHANTOM OC uses a High Volume, Evaporating Delivery System to specifically address these challenges. Increased propellant causes the micro- scopic OC droplets to disappear after only a few feet from the canister’s nozzle leaving very little residue on the inmate/subject and surrounding areas. With PHANTOM clean up is simplified by removing the inmate/subject from the contaminated area. Fresh air assists with the remaining decontamination.

Incorporated with built-in safety systems, light weight portability for ease of use, backed by independent health studies and cost effectiveness, PHANTOM quickly ends dangerous situations with less staff involvement. With the addition of the SABRE RED PHANTOM to your arsenal, you’ll escalate your aerosol irritant projectors, not your level of force. Reduce injuries and “Hard Entries” with PHANTOM, the ideal Cell and Area